Rob and Lisa Laizure are the parents of seven children. They believe strongly in the sovereignty of God and in the Bible as our final authority. Their passion is getting fellow Christians to understand the importance of reading and studying God’s Word on a daily basis. 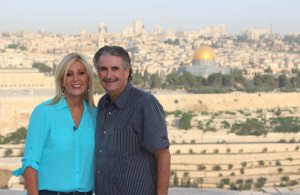 After Lisa and I were married and as we settled into our new home, time started to fly and my job became very demanding. Since it took me five years to get through high school, I felt I had something to prove, not only to my boss (who happened to be my father), but also to myself. As I reflect back on those years, I see a pattern of slowly drifting away from that decision I made about Christ. I stopped reading my Bible and rarely went to church. The ways of the world seemed to attract my attention, which was a far place from where God called this “supposed Christian.”

Suddenly the only thing that mattered in my life was money, ego, and a huge power trip. My father offered me a promotion which I took even though I knew it would devastate one of my brothers. My life became all about “me.” I remember coming home one day and telling Lisa that my business was first in my life and she and the kids were second. As I was promoted and the business grew, so did my ego; I felt I could do no wrong. But along with all this came a home that was suffering deeply. Then my world began to tumble down.

I left my family business position with a six-figure income over a dispute. Because of this decision, we lost our home and my truck. We had to sell everything we owned just to keep food on the table, all while trying to start our own business. All my so-called friends seemed to abandon me. It was amazing that as long as I had money, I had all the friends I wanted, but when I drove a 1980 pickup truck and sold used baby clothes, the phone stopped ringing

What a humbling experience—but what a growing experience! God used this awful time in my life to make me realize what was really important, bringing me full circle back to my wife, children and especially to God.

It was during this very chaotic time in my life when I had nowhere to turn that God reached down and drew me to Himself. I picked up my Bible, started praying again, and that was the beginning of what I call my “true conversion.” Jesus became the most important part of my life and from that day on it has been a continual climb to know Him better each day. As I began reading my Bible I was confronted with what following Jesus really meant and how becoming a Christian wasn’t just a quick prayer that catapults me to heaven but instead it meant becoming a “new man,” that the “old man” is gone. I learned that true conversion is seen by a changed life!

Am I truly a Christian? These words, often unspoken, cause many of us to wonder about our faith. For me, I “accepted Christ” as a very young child. I was involved with a large Christian organization in high school, but by the time I was in college, I decided Christianity had very little to do with the “real world.” I would go to church and try to be a good person, but that was the extent of my Christian life. I remember one day as I was driving, I actually thought to myself that being a Christian meant nothing. What had it done to change me in any way? I always felt God was lucky to have me and He should be very happy that I was smart enough to “accept Him” as a child. I never realized that with those thoughts God was dealing with something much deeper in me. Was I really a Christian for those 30 years when I thought I was? If I was, what exactly did that mean? It seemed like I had done the right thing according to all the crusades and religious programming I had seen on TV. All the churches I went to told me all I had to do was “go forward” and “receive Christ,” and I had done that, but why did it not have any effect on my life?

One Thursday afternoon I heard a pastor speak on “what it means to be a genuine believer,” and I walked out in tears. Was it possible that a person could go to church all her life, try to be a good person, and yet not truly be saved? That question sent me on a little journey to see what God had to say about it.

I first had to come to the conclusion that the Bible was truly the Word of God, God’s way of communicating with His people. I had to believe 2 Timothy 3:16: “All Scripture is givenby inspiration of God, and is profitable for doctrine, for reproof, for instruction in righteousness, that the man of God may be complete, thoroughly equipped for every good work.” I had to believe what the Bible said. If I only took the parts I liked and discounted the rest, then I might as well not read it or believe it all. Since I do believe every word in the Bible is inspired by God, I trust what it says about being a Christian.

What I found was truly life changing. Being a Christian was nothing about me, as I had always thought, but it was all about Jesus. It was all about realizing I was born a sinner, there was a huge gap between God and myself, and there was nothing I could do to reach Him. I could not be good enough, go to church enough, or do anything enough that would please Him. I realized as I read the Bible that God is holy and I am sinful. What I learned was that this was never about my “accepting Jesus,” but it was about His reaching down in grace and mercy and giving me a new life. It was about coming to grips with the facts: I was completely “dead” in my sin and it took an act of God to make me “alive.” I read verses that said things like, “No one can come to Me unless the Father who sent Me draws him…” (John 6:44). It was then that it hit me: God was the instigator of this relationship, not me. He drew me to Him, He told me in Philippians 1:6 that He began a good work in me and would complete it.

Suddenly I understood what it meant to be a Christian and it was the most humbling experience of my life. Instead of this life being about what God could do for me, it became a life of gratitude for what He did for me. I was bought with a huge price—the blood of Jesus on the cross; since He bought me with such a tremendous price, I owed Him everything. If I was to spend eternity in heaven with Him, my life here needed to be lived for Him. Being a Christian never meant saying a short prayer or walking an aisle so I could be saved. Could that have been the beginning of my life in Christ? Absolutely, but what would determine that would be what happened after I said the prayer or walked the aisle. Did my life change? Did I love God’s Word? Did I spend time talking with Him?

Becoming a Christian is like getting married—when you decide to take the step, your life completely changes. You find your life is not your own. You make a decision to live with the person, share a home, live a different lifestyle, and share new responsibilities. The same is true about being a Christian. You make a decision to give your life away to God. You are not a single person doing your own thing anymore; instead you agree to share your life with God, and with that comes an enormous responsibility to find out what pleases Him and live that out. You make a commitment to Him for “better or worse.” Things will never be the same as you follow Jesus and live for Him!